In 2018, OMWD engaged House and Senate committees as well as staff from the US Bureau of Reclamation and Government Accountability Office on the Title XVI program that facilitates water reclamation and reuse. The program has been an important funding mechanism for the development of recycled water infrastructure that ultimately increases the reliability of California’s increasingly taxed water supplies.

“OMWD takes great pride in leading the way on water infrastructure and water reuse,” said OMWD Board President Ed Sprague. “The award gives credit to the efforts made by our board and staff to ensure our customers’ voices are heard at the federal level.”

ACWA is the largest statewide coalition of public water agencies in the country, with more than 430 public agencies that collectively serve 90 percent of the water delivered to cities, farms, and businesses in California. 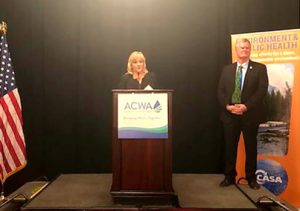 Thanks for signing up!
©2017. olivenhain. all rights reserved
Download Acrobat PDF Reader