Mr. Kephart has 20 years of service on the County of San Diego Service Area 107 Fire Advisory Board and currently serves on the Rancho Santa Fe Fire Foundation board. A volunteer firefighter for the Elfin Forest/Harmony Grove Fire Department for 19 years, he achieved the rank of Captain and chaired the department’s facilities committee.

An OMWD customer for 35 years, Mr. Kephart also retired from OMWD as a Pump/Motor Technician II in 2017 and held California Water Distribution and Water Treatment Operator certifications. Prior to working at OMWD, Mr. Kephart worked in the construction and mechanical engineering industries.

Additionally, Mr. Kephart has been a volunteer docent at OMWD’s Elfin Forest Recreational Reserve for the past two and a half years.

At his interview with the board, Mr. Kephart expressed that his extensive experience on local boards and in the water industry would allow him to function immediately as a contributing member of the board. He also expressed a need to remain engaged on federal and state legislation that can heavily impact ratepayers.

Mr. Kephart stated, “OMWD is an exceptional district, and I want to see it continue to provide customers with what they need – high-quality water at fair prices and great customer service. I am excited to serve on the board and contribute to that success.”

Division 4 of OMWD’s service area includes the communities of Elfin Forest, Harmony Grove, 4S Ranch, and Rancho Santa Fe. The Division 4 seat on the board became vacant on September 12, 2018, with the resignation of Director Jerry Varty. Mr. Varty had served on the board since 2007. Mr. Kephart will serve the remaining, unexpired portion of Mr. Varty’s term, which runs through 2020. 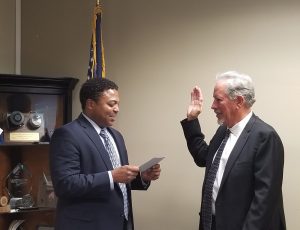 Thanks for signing up!
©2021. olivenhain. all rights reserved
Download Acrobat PDF Reader