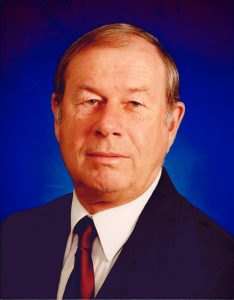 Director Bob Topolovac, currently the longest tenured board member, serving on OMWD’s board since August 19, 1999, passed away on October 7, 2022. He was 82.

Mr. Topolovac had been a resident of northern San Diego County since 1965 and lived in Rancho Santa Fe with his wife. He held a master’s degree in human relations and school administration from Ohio University. Mr. Topolovac retired from a 35-year career in higher and secondary education. Committed to safety, he also served our community as a volunteer sheriff at the San Diego County Sheriff’s Department Encinitas station.

During his time on the board, Mr. Topolovac, served as Board Secretary and was a past President and past Vice President. He served on OMWD’s Safety, Personnel, Ad Hoc Facilities, Ad Hoc Cybersecurity, and Ad Hoc Public Policy committees. He had extensive knowledge in insurance, safety, and personnel issues.

Mr. Topolovac served for over two years as OMWD’s representative to the San Diego County Water Authority and was Past Chair of the Authority’s Legislative, Conservation, and Outreach Committee, a member of its Administrative and Finance Committee, and a past representative of its Recycled Water Committee. From November 2011 through July 2014, Mr. Topolovac tirelessly represented OMWD’s interests at the regional level. Additionally, Mr. Topolovac impacted regional conservation and outreach efforts, most recently initiating the inclusion of water supply infrastructure lessons in SDCWA’s school program.

Mr. Topolovac was a tireless proponent of local government’s need to protect the environment while tenaciously pursuing alternative, local water supplies. In Mr. Topolvac’s own recent words, “I am honored to have served for the past twenty-three years as a member of Olivenhain Municipal Water District’s Board of Directors. During my tenure, we have demonstrated our commitment to improving local water supplies by building a 34 million gallons per day membrane water treatment plant and extensively expanding our recycled water supplies, including bringing a 2 MGD recycled water facility online in the 4S Ranch area of San Diego. We partnered with US Bureau of Land Management and SDCWA on the Emergency Storage Project, which included SDCWA’s completion of the Olivenhain Dam and Reservoir, which can hold 24,000 acre-feet of water–enough water for a year for 60,000 typical families of four. We also operate SDCWA’s Elfin Forest Recreational Reserve, which surrounds the Emergency Storage Project and was enjoyed by 127,489 visitors in 2021.”

A ceremony celebrating Mr. Topolovac’s life will be held in the coming weeks.